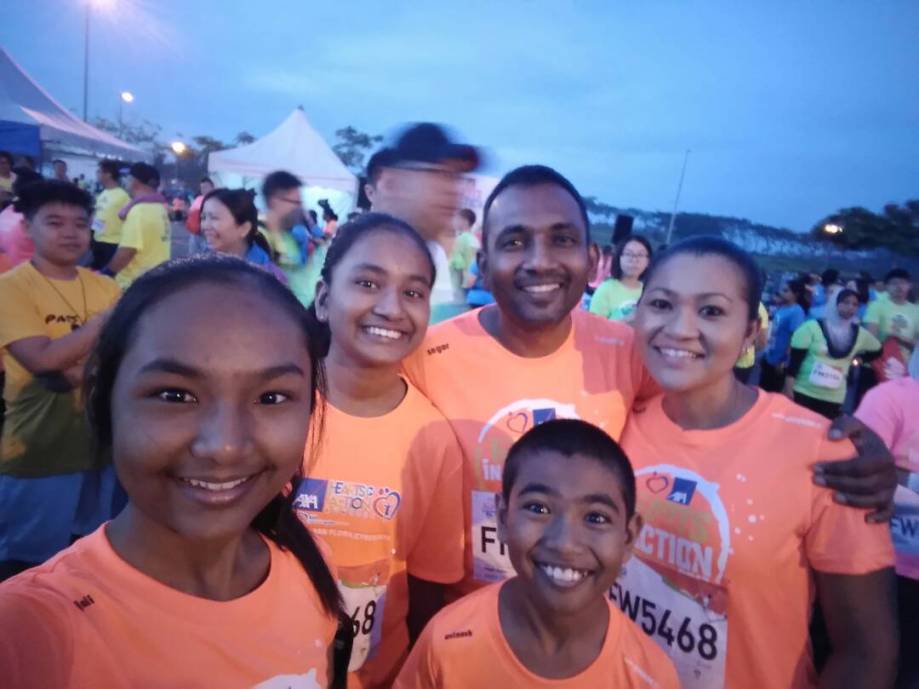 People take part in charity runs for a variety of reasons. Some do it to raise money, others to challenge themselves and beat their personal best while for many it’s an opportunity for them to get fit. I personally do it for all the three reasons! But no matter what your motivation may be, everyone agrees that charity runs are extremely fun!

In order to prepare for the fun, I needed to enlist some help so I cornered my family and I managed to convince hubby and kids to run with me! If you really are determined to have fun,trust me, that’s the way to do it! (oh, and it’s healthy fun too, bonus!)

We arrived at MAEPS, Serdang-Mardi by 6am, got a safe and nice parking spot. As soon as we got near the stage we could hear the music and feel the excitement. We instantly joined the crowd of 5000 runners and even participated in the warm up session. The morning of the race excitement buzzed in the air.

At the starting line, my children felt like lions waiting to be let out of their cages. They were rip roaring and ready to go…Ready to race? Indeed…..My children and I were ready to rumble! Then at 7.20am, the 6 km were flagged off!

The lakeside running was beautiful and rather undulating.Lots of ups and downs, at some points the path narrows but never enough to stop you passing people if needed. It was a really sunny day and by 7.45am, the sun was shining brightly but parts of the route was in the shade, which was nice.

The race had lots of rolling hills which my quads did not love! But I loved how different it was, running with my “sole” mate- hubby and my children….My hubby and son finished the race strong! This race was strictly a “fun” race, so no clocks, chips or stop watches were involved. As always, it’s nice to run by feel and solely for FUN!

We walked, we ran, we jumped, we skipped, we danced….I loved every minute of it and I had no idea how what my time was!

It was great to see so many
families come together with their children take part in the run, and running with a smile!

As we approached the finish line there was a nice crowd cheering everyone on with lots of children wanting to hi-fives and runners who had finished staying to cheer people on.

It was a fun event. The route was nice, even tough, the roads were not fully closed but the organisers ensured all safety measures for the participants, there were lots of marshalls and volunteers on duty, water stations were well organised, the runner T-shirt was cool ( we had our names printed on it), the medal was awesome, great little course, fun volunteers and nice running community.

The only thing I would do differently is change the start time, make it earlier or possible route the course a bit differenly. At MAEPS the beginning portion of the race is in an open area and by 7.30am it was already heating up. Thankfully the second half was mostly under trees and in shady area.

It was so nice to care about our quality time, family bonding time instead of keeping pace throughout the race. We made so many awesome memories, laughed until our sides ached and got some really awesome pictures.

A great race doesn’t come from a PR or a new attained distance, but more from the memories and lessons you take away from them. As always, I was reminded of how much I love this sport and how special it is to share it with my favourite people ever- Hubby and Kids! 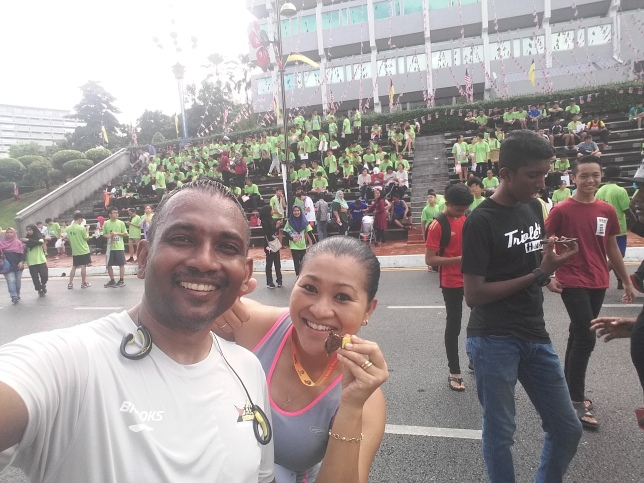 I have been wrestling all week with my approach to writing this review. The day has come and gone, the most eagerly anticipated race in Seremban, boasting almost 10K, 7722 runners from the school category and the 1865 runners for 21km and 10km category A to J. This was the 30th Year, claimed to be the “oldest” Half marathon in Malaysia.

So, with us, this race is personal. It is my hometown. It’s a commitment to always going the distance, no matter what! To high fiving/thumbs upping friends and strangers, to pushing ourselves beyond our purposed mortal limits and the generally have a great time. I am truly honored that this year, Hubby and I were under the armour of Malproc Sdn Bhd- Mr Robert Tio. Thank you very much, sir!

As usual, we arrived early and managed to get a safe and nice parking spot. The minute we stepped out of the car, it started to rain cats and dogs. But that did nothing to us:- at sharp 6.30am we walked to the starting line, in the heavy rain, it was chaotic with more than 10K runners walking around without any sense of directions. The sound system was unclear and no one could hear the announcements. Then at 6.45am…bang! the gun went off and the 21km runners were flagged off, 10 minutes late and some confused 10km runners also ran along with the 21km and at a check point, these 10km runners were disqualified.

Unsurprisingly the first KM or so was spent trying to get past quite a lot of runners. People say this route is quite good for achieving a PB, which it probably is if you’re an elite runner, but back in the main pack lots of people seem to stand closer to the start line than they should. Why? We all get our own individual chip time, so you have nothing to gain by getting in the way of faster people! Not that I am fast, but I’m far from the slowest at this type of mass event and it is a bit annoying when you see runners who started near the front begin to walk about half a mile. You can waste a lot of energy trying to get round them. Note to self-get up and in the pen earlier next time!

The flagged off for 10Km was delayed too about 10 minutes, eventually, after the gun went off, I got into a steady pace and managed to keep going, right along the road in front of my old school- KGV, runners had to risked their lives running side by side with some “wannabe” fast and the furious car racers, the roads were not fully closed just a few cones were placed in between. Never mind there hadn’t been any major incidents with traffic before but I wish organiser would still place safety of runners as their priority! Just because no one got run over (YET) doesn’t mean it will stay that way.

The route we did for the 10KM and 21Km was exactly the same as the previous years but blamed it on age or soemthing, it had long gradual climb littered along the route at Forest Heights, nothing steep but a long climb. ‘Seremban-rians’ also have their own ‘Bukit Tunku”- stair way to hell route….hahahahahahahah

My energy was high.I was gleefully floating along the miles..running into puddles of water. The legs talked and I listened. Then came a main junction, a crossroad between Ampangan, Paroi and Sikamat, there was no sign or marker at this point, so all the runners just kept running, it was a scene from the three blind mice- where the blind was leading the blind. There was a traffic police trying his level best to control the traffic at this main junction.After crossing the main road, I saw a sign 21km and 10km…Ohhhhh nooooo! I panicked and was alarmed. If the 10km-school category and half marathoners joined this route now, I’d be swept up in the stampede. I’d die like Mufasa in the ‘Lion King’ movie. Anxiety welled up in me. So I had to do more bobbing and weaving, between flooded roads, narrow spaces and moving vehicles.

I needed to finish- I saw a sign 4Km to go..In desperation, I was on the go again, and I was completely over other runners, what they were doing and what they thought of me. By the time the marathoners started overtaking me I was totally lost in my own experience, just me and my legs and my lungs and the road and wet weather and grey skies.

Then I spotted the sharp corner, near A&W and made the final turn and saw the finish line ahead, just a few hundred meters down a muddy paved field. A weight had left me- I’d done it, I’d proven that I could do it, Then the official wrote down my number- No 26….oh wow! I clutched my medal with happiness and pride.

I always like to have an aim on race day to keep me going and have a dream of completing a 10km in under 60 minutes, just to get a time with a 5 at the beginning! As I get older I realise that’s less and less likely to happen, but it’s still a good motivator. Will I be back next year??? Hmmmmm…….It all depends….