The goal is to just finish the race! That’s what my 2 children, Amisha aged 11 and Avinash aged 9 did on Sunday, 20 March at Canary Gardens, Klang, Selangor.

There were multiple heats which went off on the morning of the race, mostly to ease congestion on the course. The temperature predicted on that day in Malaysia was to be 40′ degrees, supposed to be the hottest day in Malaysia, heat and humidity was terrible that day….but bear in mind, nothing could stop Amisha and Avinash!!

As they lined up to start, both were nervous and excited. They had no idea what to expect but knew it would be a challenge! 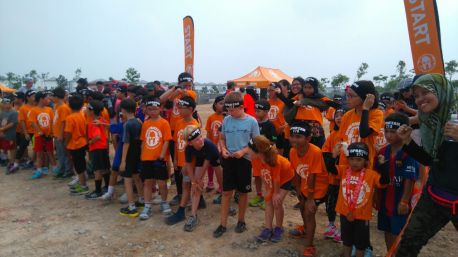 The race started with a bang! They had to crawl under walls and rocks which cut at their knees and elbows, they had to adapt and also go through mud pits filled with water and mud. There were numerous areas where they had to run into a jungle…Ohhhh, there was also an area where they had to try to spiderman their way up and down a net. Both, Amisha and Avinash got mud filled up in their pockets, socks and shoes! At the finish line, they place the medal around their necks, then refuel their bodies at the water station.. 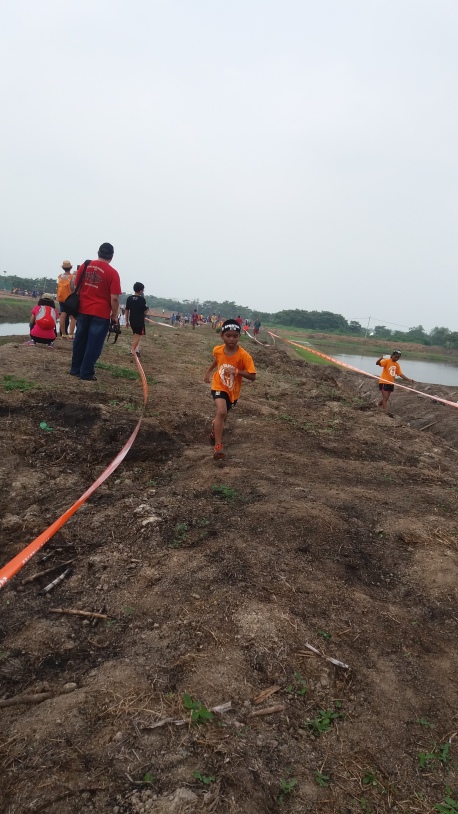 If you haven’t run a Spartan Race yet…I will say this about the Spartan Race, it is addicting. And it’s a great motivation. Signing up for Spartan Race gives you a deadline that you have to hit. So it’s either you get moving or you struggle through the race big time. Everyone who runs the race encourages others to finish. It’s not about how long you took to finish, but that you finish!

The UEM Charity Run started just like any other. A chap said go and blew the whistle and sounded the horn and 6000 runners shuffled into life! A stunning diversity of masses bouncing around for position.

This is the funny time where you are not really sure who is in front of you and who is behind. The next 3 km I actually got a decent pace going, I overtook a few people. 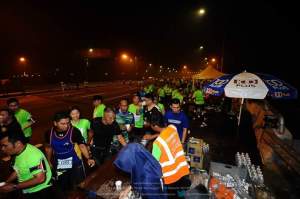 To the organisers, being the first UEM Charity Run..Kudos! You did a great job! The roads and routes were just so awesome…Marshalls  did a great job! Water stations were placed at the right spots and were well organised without any chaos. It was a fantastic run.

The cheering was great, folks giving high five’s…hmmmm…my stomach wasn’t feeling good, but I kept telling myself….you run with your legs not with your stomach. Forget about it..Run…run…run… run…run just run….The farther I went the better I felt. I forgot how good it was to run on the NKVE Highway and the stomach thing just faded away.

As the sun came up, I really started to struggle with my breathing…only 2 km more to go….sounds like making excuses..it sort of is..LOL

So, I put together a series of arguments as to how I was going to complete this 12 km race here on in….I am really exhausted, feeling de- hydrated, splutter and a bit miserable, it’s a really nice day..yeah..let’s just walk the rest of this….

The last check point came at last!! It is always a wonderful sight..well, wonderful for what it means in the context of the race. It’s grim but is great fun when there are loads of people around.

I finished my race with a smile on my face, not because it’s over but because I worked through my emotions and ran a solid run. 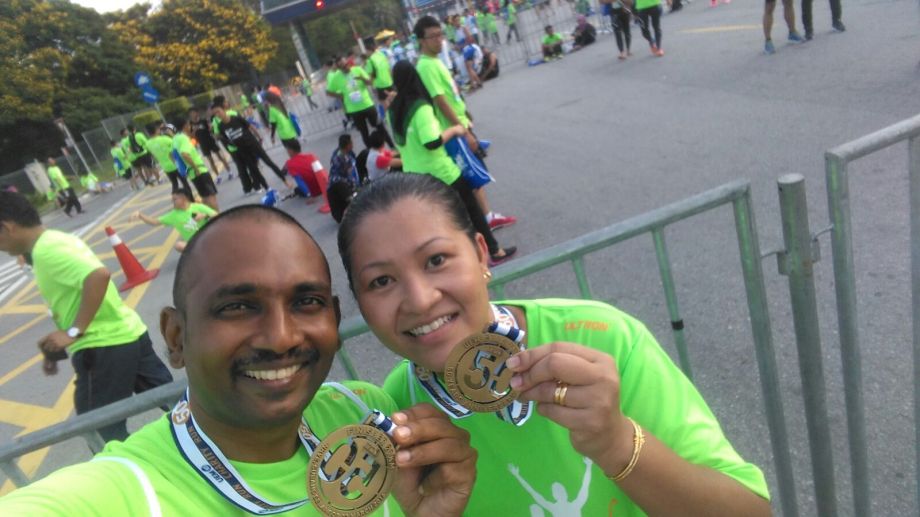 Life is about collecting these experiences and memories. I feel rich because my head is full of these memories!

This has been a whirlwind weekend………

I got out of bed at 4.00am, got up and took a shower, put on my running gear and outfit and got out the door while chewing on bananas and peanut butter sandwiches.In the car, I was looking at the dark city and into blankness….I was taking it all in, enjoying every minute before the madness of the race would start.

The darkness gave a whole new dimension to the running experience. I enjoyed it and was smiling at everyone along the way to the starting point.

We reached early to pick up our race kits and T-Shirts. Then we headed to the starting point, for a moment I thought I was at the wrong venue.I seriously thought we arrived at a Rock concert! The DJ was playing Rock Music and it surely did not do justice to us runners or bring out the best or even motivated us in any way!Uurgghhhh…

However, flagged off was on time but a huge disappointment..Why? Just into the 1 km a big blunder happened, runners were literally running into each other! A big confusion right under the tunnel, where we were suppose to make a U-turn. Then, at 2km….The killer hill…..No wonder the route was not given to the runners. Just one day before race day, it was on their FB page.

Then to make matters even worst, more hills! Ohhhh man….It was like stairways to hell..at one point, somewhere near the Faculty of Economy, there was another event going on, a conference of seminar for the University students…the runners were left running without marshals or policemen. The organisers seemed to have this concept in their minds…”Sendiri lari, sendiri kena langgar, sendiri tanggung”…meaning….”You run, you get hit by a vehicle, it’s your own risk!”

Then another boo- boo happened just before the last check point, my hubby practically had to chased a runner about 100 to 150 metres to tell him that he was running and heading into the wrong direction and he must get through the check point, where the timing would be taken. There were marshalls only at certain designated spots. However, just like the FIFA World Cup Song by K’NAAN- Wavin’ flag….Yeah, that was exactly what the marshalls were doing..just waving the flag…and leading the runners into wrong directions! Shape up, please….Dear organisers!

Ah yooooo…..I had to struggled to get to the start line and well, getting to the finish line proved to be no easier!

When I reached the finished line, got my medal and was expecting a goodie bag but all I got was a medal and a plastic bag..Then to make matters worst, from the start of the event the organisers promised a carnival filled atmostphere and Elizabeth Tan would come……………BUT……..

The runners who had signed up for the 5 km Fun Run were not entitled even for the T-Shirt! 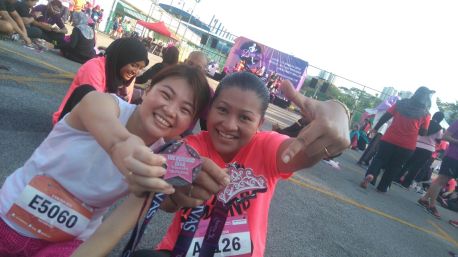 I do have those familiar pre race butterflies in my tummy….But my main goal is to enjoy it as much as I can, what more laaah…I will be running with my hubby and along side with Yun Ling and Siew Kiem..Hmmmmm..Oh probably I might just end up eating their dust….LOL

The first race will be the DIVA RUN and on Sunday, The UEM Charity Run…I guess I would have to do a bit of a balancing act eh..

I felt abit glamorous this morning….why?? Well, while I was driving, on my way for my morning classes today, I over heard on the radio that the authorities will organising a road closure this sunday, effective 12midnight until 10am the next day. Woot! Woot!

Oooohh….So thrilled and excited! I will be running on NKVE highway! As you too can imagine, the weekend is gonna be super duper awesome!

Let’s allow that one to sink in for a second! Ok runners, I want to shore things up this weekend. So, it’s gonna be “All smiles during my miles”

By definition running is an individual sport requiring nothing and no one other than yourself and your desire to move….But, I have learned, however……That it’s so much more than that!!

It is not about the competition, the finish time or the position…To me, it is about running with family and friends through thick and thin. Every single step and second of it. Shared- the good, the awesome, the bad and the awful! 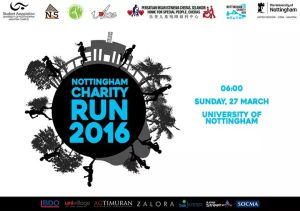 About a week ago, the ACE Society from University of Notthingham Malaysia gave me the thumbs up to do a write up about their upcoming run and I was thrilled about it. The organising team was very obliging, everything that I asked and requested for was sent and given to me within minutes…KUDOS, ACE Society!

Runners often say that they seek to test their limits by running these long distances. To me, I think it’s more about discovering possibilities!

So, my dear runners, if you are attracted to the idea of running and doing some charity and of course scoring sweet medals to commemorate your finishing touch….Come run with your heart not with your legs!

See you on the 27 March 2016, The Notthingham Charity Run. For more information http://ncr2016.sanottingham.org/

Before I get into my week in review, I need to say a huge THANK YOU and TERIMA KASIH to everyone who read and commented on my last post! You guys are awesome and amazing!

On your marks….Get set………pose!! It’s Diva time!! LOL… I’ve registered for my next run called the Diva Run which will be held next weekend the 12 March 2016 along with my partner’s in crime Yun Ling & Siew Kiem….woot…..woot…..!

T-shirt- Hmmm…well. nice design, although I think it’s cotton, but they have women’s and the men’s fit, so I appreciate it…

I always put my thoughts about the medals towards the top of my race race reviews. Medals are my favourite part about races. They’re the automatic souvenir of the race, the training and the adventure that got you to the start and finish line….

See you there at the Diva Run! Ohhhhh……Forget the glass slippers divas!! This princess wears running shoes…..

When the going gets tough, the tough say a lot of things…….

The morning of the race, I woke up at 4.00am with a blahhhh mood hovering over me. After a nice cold bath and sipping my cup of coffee and I was all set for the FTAAA AMBank KL City Run 2016.

Runners were flagged off by stages, according to category. The route in the first 10 km was the same as of in the 2015, so I kinda know the sections with uphills elevation.

Running on the hilly route was challenging despite the crowd, wind and chill. Watching the runners expressions and outfits was fun. After the uphill run we headed into a downhill where I pushed harder to try to gain some speed. I did catch up to some runners who had passed me, at about the 8 km, I finally found my optimal pace and it was absolutely fantastic! Let’s just call it the moment of ecstacy! It seemed to me that I made almost no effort when I was running then, except the up hill running at Bukit Tunku…(Signs of aging….LOL) 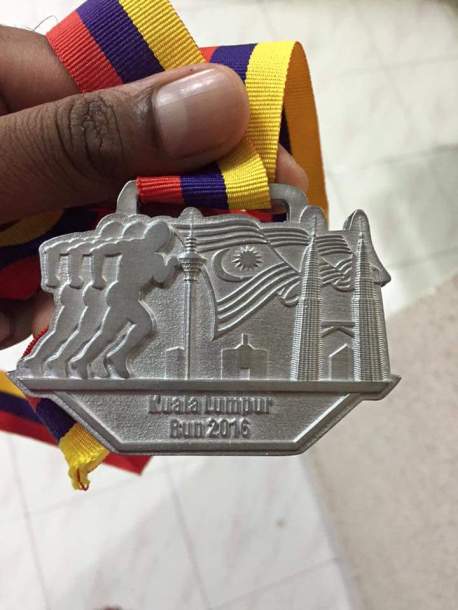 Finishing point and the atmosphere were pretty much the same like last year. And the very nice, big medal was the icing to the cake for me….Just a little disappointed with the quality of the T- Shirt…

My overall impression, it was a good run.