In conjuction of Hari Sukan Negara celebration, Proton HSN21KM is an initiative by renowned event organiser Muse Group Asia, supported by the Ministry of Youth and Sports Malaysia. The run, in line with the mission of Hari Sukan Negara, is aimed at further igniting and strenghtening the desire to keep fit and be healthy among Malaysians and to create a sporting nation. Held in the heart of Kuala Lumpur with over 10,000 runners this year!

Days before the race, I was totally scared, nervous and excited all at the same time! And honestly, I had every right to be..Don’t get me wrong, I trained, but it was tough sticking to a strict plan that I made out months ago. (Life happens)

My mantra was to do what you can do-no matter what-just keep going. It’s time to nut up or shut up! And off I go…….

And all the traffic was headed the same place we are. What does that say about me and other runners? Up to run a grueling test of personal endurance at 8.30pm just for a finisher T-shirt, a medal and bragging rights. 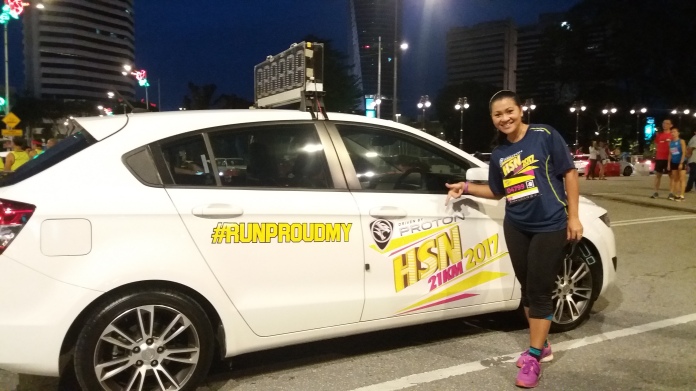 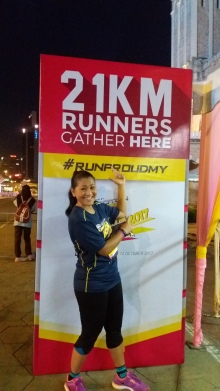 I am trying to stay calm and pace myself, but let me be honest here, I had adrenaline pumping like mad. The atmosphere was just awesome. The set up was really fantastic! We were entertained by the Buskers as well as a super hyper warm up zumba session and then at 8.25pm all the 21km runners elite and ‘not so’ elite runners like me were called to enter the pen and head to the start line. We sang our national anthem “Negaraku” and few minutes later we were flagged off. The highlight of my day was, I had the opportunity to high five the Minister of Youth and Sports, Khairy Jamaluddin woot woot! One of the best feeling ever is standing at the start line, next to my hubby, who decided to stay and run with me-Thank you for your love and support, without you, I don’t think I would have been able to make it through Bukit Tunku.

I am not being dramatic when I say this, but I was so impressed by those running around (and past) me. It was hot, humid and hilly (The 3 Hs’), but even though it was evidence, at 2 KM we were all struggling, everyone pushed on. 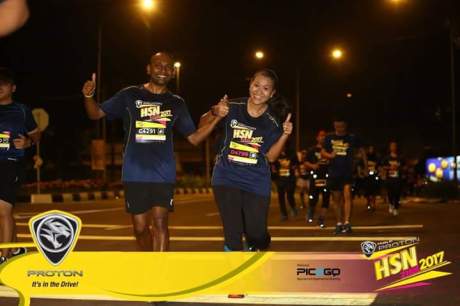 I was enjoying the crowds and cruising along happily putting no thought into what lay ahead. All I thought about how this was my day. And the joy was running at Bukit Tunku (ONLY THE BRAVE, right?) I had done all the hard work and deserved to be there and it was absolutely splendid. At 2 km, I see the big hill coming up and felt like I could take on anything the world through me. The route literally went up that hill so I mean it was right in my path. It wasn’t that steep but it just kept going. I noticed a lot of people had to stop and walk at this point. I told myself just clear the hill because what goes up, must come down…. and like a lot of others around me, I had to stop and walk. Breaking laws of physics, the top of the hill somehow kept getting farther away.

Make no mistake, running hills is not easy. It leaves your legs aching and burning and you are bound to reach the top hufting and puffing. The route was tougher in the second half of the race, but thankfully the hydration and water stations were plenty and they were very well organised. Volunteers handed out water and Lucozade efficiently.

At the 10KM, our route headed into Jalan Kuching, we were out running on a pretty main road in the heart of Kuala Lumpur. Kudos to the organiser for the excellent traffic control and marshaling. It was great to see drivers on the other side of the road with their windows down watching us and grinning, shouting support for people that they didn’t even know!

The route was altered slightly after that- we were back into those glorious hills! The hills, how do I put this, the hills are alive! After winding around through parts of Bukit Tunku, passed the Botanical gardens and more hills- But we soldiered on. There were marshals and police at every major junctions and corners.

Then suddenly I felt something shift in my body…If you’ve ever heard a runner talk about “hitting the wall” or “bonking”, that was exactly what happened. Then I started talking ‘gibberish’ to my hubby, asking him just like how my ten year old son would asked,,,” how far more’? and “Are we there yet”? for a dozen times I kept asking my hubby but all he said was- keep going! Run Chrisy! Run Chrisy! At 18KM, my body just quit on me. Then, I had to switched gears in my brain….it’s now mental! I got this! I am not going to stop! Just keep going….. I can do this! I can! I will! and once again my hubby made me re-focus!

At the route near PWTC- Sunway Putra Mall, I managed to keep going but in a bit of a painful blur. I was just focused on trying to keep up with my hubby and just kept my legs moving. I kept repeating my mantra…Don’t quit! Don’t quit! 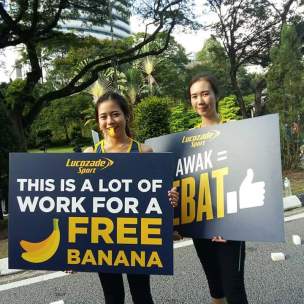 I am not quite certain how it works, but it always amazes me how the body can do things on race day that you really don’t think possible! After that Everest Climb to base camp we come to a water station. All I can see are determined faces. Everyone was beginning to look beat down and yet smiling cause they know after having come this far they will finish the race!

The final 1Km was quiet and tranquil. Runners wore few and far between. Most runners, including me, alternated between running and walking. 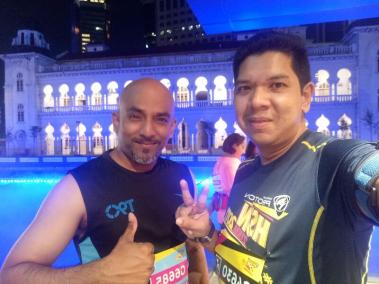 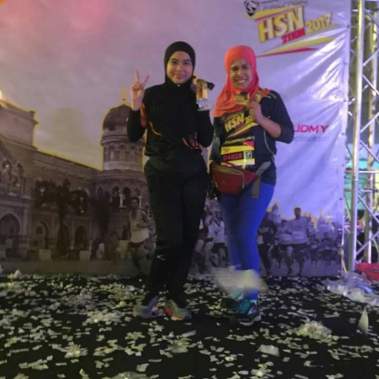 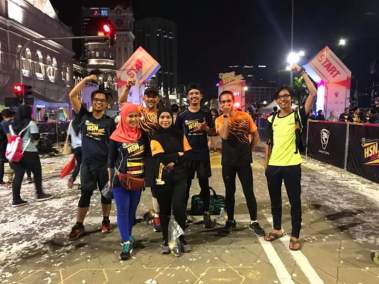 At the finished line, we were given fininsher’s entitlement, which include a medal, water and a 21KM finisher’s T-shirt. At the race village, there were plenty of booths, food trucks and entertainment too….

I have nothing but amazing things to say about PROTON HSN21KM. The course was a real challenge! A mixture of hills and hills and the hills are alive……LOL. The support from friends and spectators was amazing. The Staff and volunteers were beyond amazing and awesome! Water stations, markers and signages were sufficient and well placed and organised. The organiser did a tremendous job with traffic control and marshling. A huge kudos and congratulations to each and everyone of  you for actually being out there running, walking or crawling!