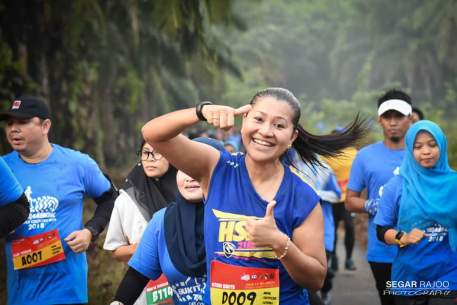 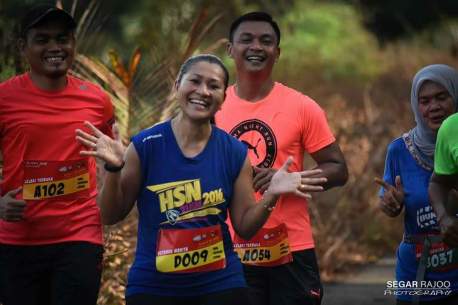 Firstly, I would like to thank Marathon Malaysia, Mr Prakash for giving me the opportunity to run Bukit Tembok Cross Country Run 2018 which was held in Pasir Panjang, Port Dickson on the 15 April 2018.

If you’ve never raced a trail race, you might be missing out. It’s so entirely unpretentious. There runners weren’t out here for bragging rights, and they certainly weren’t out here for a new saucy Facebook picture. No, they were out here for the love of it! I didn’t need to rely on my stubbornness to carry me through to the finish line, the sheer joy of it all was more than I needed.

My hubby a.ka. ‘sole mate’ decided that he wanted to take photographs instead of running this race…….Oh well, I thought….I was gonna be alone in this run……But to my surprised..along the way, I met and I ran along with a bunch of awesome runners- Aisah, Rosdi,Fahmi, Izaja….They became my pacers and I ran with them all the way to the finish line.

Packet pick-up was very easy, since it took place at Pasir Panjang, Port Dickson. The staff there is always friendly and very helpful. They had a list out that had last name and bib number readily available

Race day started pretty easy enough. Parking consisted of us driving over to a nearby field and leaving our vehicle by the road side area, which just about everyone did. There was a registration table and a same-day packet pickup station near the start line. A DJ played motivating music up until the race started. Flag off was delayed- we had a 30 minute Zumba session, which I enjoyed very much. But as for the “hard core” runners, they were already at the starting line ready to start the race.

The race started at 8.20 AM after the national anthem was played. With the start of the race, over 500 participants crossed the line..

Once we hit the actual Trail, the crowd thinned out. But it didn’t feel crowded or even lonely on the course at all. The trail is paved all the way through except for maybe a 10 foot section at the beginning of the course, and bridges of various types are sprinkled the wooded forest sections. It was quite scenic and I could enjoy several moments of running alongside rubber trees and oil palm plantations and over metal or red muddy roads.

There was a water station at around the 2.5 mark and it was well stocked, especially with at least four volunteers working the station. The course was also well marked with red arrows on the path, couple with cones to help make sure no one took a wrong turn. The course also had volunteers interspersed throughout the route to ensure participants didn’t veer off the path or get hurt.

I was mesmerized by the splendour of the place that I didn’t even realized I was coming up on the 7KM – nearly done..My heart was elated, my body was strong, and view was dazzling. I just wanted to keep running. I felt as though I could run forever. I was overcome with a strange sense of melancholy. Everything about this trail run was more than I could have imagined. The spirit of the volunteers was infectious, the authenticity of my fellow runners was disarming. When I reached the finish line, I was given a number….Ohhhhh my goodness! I won number 8! I just ran 8KM Cross Country Run!! 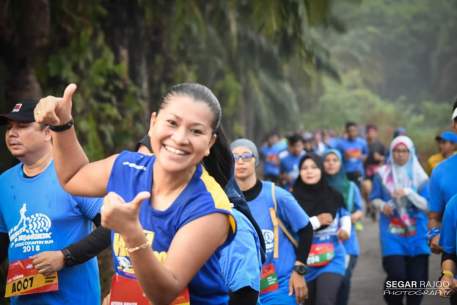 My heart was boiling with joy!

The award ceremony consisted of presenting the overall male and female winners. There were medals and cash for the 1st to 3rd place finishers for each age and gender category. The medals themselves were something special.

All in all, this is a great event, and one that should get a lot more people to run, I look forward to coming back.