Recently, I ran a race- The Seremban Half Marathon 2018 and I was hoping to finish in a specific time. I trained pretty hard and I was confident it was going to happen. Before the race, I even said, “ I’ve got this, It’s in the bag”.

However, very early on in the race, I knew there was no way it was going to happen so I changed my agenda from trying to run my fastest race ever to enjoying a leisurely, fun run. And even then, I was huffing and puffing and never wanted too see a finish line so badly in my life. Sometimes you have it, and sometimes you don’t.

When we got there we saw all the runners, in many shapes, sizes and ages which was pretty cool! There were ample of parking spaces.

There was a fantastic atmosphere at the Seremban Half Marathon, probably due to the fact that this was the first time it was held in a new different venue and route and it’s so inclusive, with runners ranging from elites through to joggers and walkers. I even bumped into Sunny Wong..

Unsurprisingly the first mile or so was spent trying to get past quite a lot of people. People say this course is quite good for achieving a PB, which it probably is if you’re an elite runner, but back in the main pack lots of people seem to stand closer to the start line than they should. Why? We all get our own individual chip time, so you have nothing to gain by getting in the way of faster people! Not that I’m fast, but I’m far from the slowest at this type of mass event, and it is a bit annoying when you see people who started near the front begin to walk after about half a mile. You can waste a lot of energy trying to get round them, as well as groups of friends who want to jog along five abreast. Note to self – get up and in the pen earlier next year! 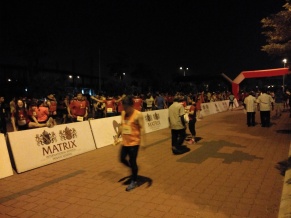 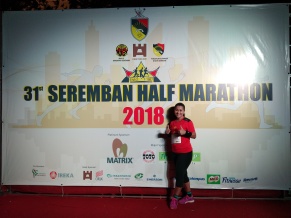 The route of the race was lovely, taking runners past some of Sri Sendayan’s finest sights such as the Army Base Camp and the residential areas, then along the International Matrix Global School. The sun also managed to break through after a while, which I knew it would as I’d decided not to wear my shades! The event was very well organised, with two water points.

My only grumble would be that the people giving out the water couldn’t keep up with demand, so anyone wanting it had to stop and wait to get it. There were some tables with bottles laid out on them was useful. As it wasn’t too hot and I’d hydrated well beforehand I didn’t bother, not wanting to waste valuable seconds.

I always like to have an aim on race day to keep me going and have a dream of completing a 10K in under 50 minutes, just to get a time with a 4 at the beginning! As I get older I realise that’s less and less likely to happen, but it’s still a good motivator. My first few mile splits were pretty good at around 8:15, but I find it hard to keep that up over six miles, so did fade a bit towards the end. But I still managed to grab my finisher medal. Woot Woot….

I have nothing but amazing things to say about the Seremban Half Marathon this year! The course was excellent! Fresh air, new route. A mixture of flat roads and yes, a few hills. The support from staff and volunteers were awesome. Water station/isotonic were well organised and plenty. Markers and signages were well placed. This year, the organisers did a tremendous awesome job with traffic control and marshalling. Runners’ safety were their top priority, thank you! A huge kudos and congratulations to each and everyone of you for actually being out there running, walking or crawling instead of just sitting on your couch….YOU ALL DID AWESOME! A special ‘Terima Kasih” to uncle Robert Tio from Malproc- it was an honour to run the Seremban Half Marathon 2018.

Running is an individual sport. We each have our individual speed, stride, goal. It depends on us only to get to the finish line, to put in the miles. no one can do it for us. But, at the same time, the running community is one of the most supportive, most encouraging communities you will ever find. Where else will you find people of different ages and backgrounds supporting each other? We all meet at the parks, at the trails, at the start line and yes-at the finish line. When running a marathon, you often see runners helping and pushing each other to move on (even if it will affect their time). Because no matter how strong or fast one is, we all go through tough times, and we all need a helping hand, that encouraging voice that reminds us how strong and capable we are. This you find at the marathon course and yes, again, if you are lucky, in life.

One thought on “Seremban Half Marathon 2018 Race Review”