The alarm clock ( I have a Justin Beiber song for my wake up “race” alarm, not normal for a mother of 3) went off at 3.48 a.m (lucky number maa…) on Sunday morning. I did the normal discussion in my head, “WHY ARE YOU DOING THIS….My bed is so comfortable and I am so sleepy and tired!” That happens each time I get up crazy early for a race. I usually continue this discussion all the way until we get to the starting line. Then once the excitement builds, I see all of the other runners, I wake up a bit and remember why I do it!

There were 2,000 runners but it never felt too crowded. Sure the start is always packed, but there were plenty of times during the race that I felt like I had all the room in the world.

Sharp 6 a.m.- 21.1 km were flagged off! A few minutes later, finally after a bit of milling around when I thought I was going to be sick with nerves, the air horn goes off and the 10km were off! There was some jostling for position at the front and I was glad I was in the middle with the “fun” runners. As I suspected the excitement had me setting off a bit quicker than I would usually and I was glad that my muscles were already warmed up. For the first 2km the group I was running in stayed more or less together. A few people passed me. I passed a few people. We were all finding our own race to run.

At about 5km, my group started to separate, with some falling behind and others pulling ahead. There was a water station at this point with a few runners gulping down a quick drink (There were two other stations on course at 2.5km and one at the 8km)

By 7km we’d thinned out until I was run/walking with a couple and their toddler in a stroller and with the same 3 or 4 people I stayed with for the rest of the race. I knew that because I was run walking and the volunteers would encourage and smile and cheer at me to keep running-there’s a lot of camaraderie! 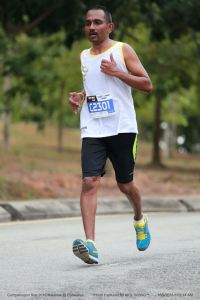 Most of the route was flat and I haven’t run around Cyberjaya much before so it was nice to see a new area. The KM points were well placed and I was feeling quite good watching each km go past. Seeing the 21.1km runners-front runners fly by was incredible-It amazes me that pretty much they were running twice the speed that I was running-including my hubby…..fuh yoooooo!

Each 2 km of the race was flagged with a sign, so I knew when I was entering the very last section. I finished my race with a smile on my face, not because it’s over but because I worked through my emotions and ran a solid run.

To me, race day is a funny thing. It can be the source of your greatest triumph or the cause of your deepest sorrows. It can make you love yourself and hate yourself at the same time. So my fellow runners out there, run the race because you love to run, NOT because you want to achieve something!

In terms of the race itself- I would give this race a massive thumbs up as from my perspective it was quite well organised. I have nothing but amazing things to say about Compressport Run 2016. The course was excellent, the support from friends and spectators was awesome! The staff and volunteers were beyond amazing. I will absolutely be back next year!