Always have your end goal in mind and keep focused on it! I won’t lie, during many moments at different races, I’ve asked myself why I put myself through this? What gets me through is the finish line and the feeling you get when you know you’ve done something that most people won’t even want to try……..

I woke up too excited that morning, the day of the ATM HAlf Marathon was finally upon me. We arrived in the nick of time. Parking slowed us down because there were buses loads of runners/ soldiers/trainees  everywhere! So, my hubby told me to start jogging to get to the starting line first while he finds a safe parking spot. Adrenaline was flowing, nervous butterflies were dancing around in my belly.

Standing there at the starting line was an overwhelming experience. There were 11, 000 runners ready to run! It was still dark. The only lights were those at the flag off area and the ones lit up for the course. Hubby was not in sight…Kept my fingers crossed that he will be able to make it on time..My heart was beating. The music was playing, energy was soaring. Some were crying, others were laughing, some were seriously talking out loud a.k.a pasar tani/ pasar pagi and still others were just mentally preparing themselves as well…..10,9,8,7,6,5,4,3,2,1………………….AND WE WERE OFF! Oh crap! I turned left and right and there I spotted my hubby zig-zag-ing overtaking runners……..relieved, I moved slowly towards the starting line, like pushing a stalled car, praying it will start. 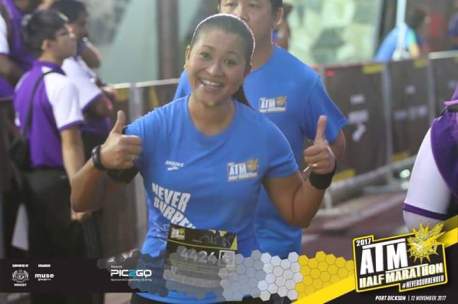 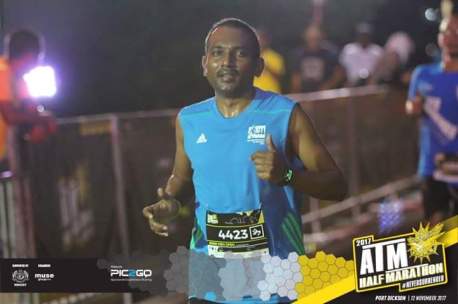 It was a perfect day, light breeze, just after a heavy down pour but all my thoughts were positive and geared towards moving this machine of a body forward. It was a smooth flag off with plenty of room to manoeuvre.

Well, now you’re boned! You’ve actually got to run this thing or die trying anyway. If you’ve got this far…I’m sorry! Really! I’ve failed to convince you to do otherwise and now you are running some ungodly distance, possibly for some vaguely undefined reason to do with charity or health or running with ATM- woot woot Angkatan Tentera Malaysia…ehemmmmmm…. 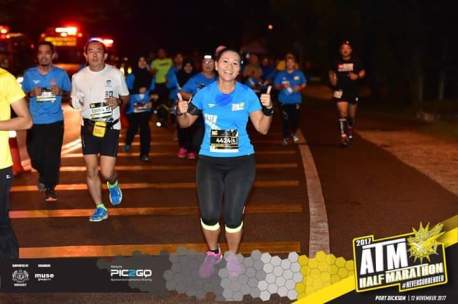 I was really impressed with the route, eventhough, with the sudden and last minute changes, this route seemed to be a hidden gem in this lovely place called Port Dickson. It was well planned and executed and the scenery was great! The crowds (a.k.a) army/soldiers/trainees, the course, the atmosphere-it is the full package! I would defininetly recommend to all my fellow city runners- This is a “MUST RUN RACE”, you should not miss it! It is also an awesome route to do your PB. It’s flat, fast and furious and there are no stairways to hell…..phewww….

From 1KM to the 5KM, the route led us into a scenic village, I could hear roosters, the sound of the ‘azan’ prayers and my thoughts led me back to my school days, where we had to run a race called ‘merentas desa’ during our sports.

When I started the race, I was ecstatic. (Thoughts included: “This is awesome, I feel great!” and “Why don’t I do marathons all the time?”) But let me assure you, by 14KM or 15KM, those thoughts were long gone…..(Replacement thoughts: “Wow–my freaking body freaking hurts”, and “I would really like to stop, like 5KM ago”.) The best I could do was focus on thinking about how gorgeous it was outside….

Along the way, there were sufficient water stations filled with awesome volunteers who helpfully spilled water and 100Plus on your brand new overpriced running gear..Noooooo seriously…….Thank you, dear volunteers. Be sure to thank them for this, dear runners because I don’t know what would possess somebody to get up at an ungodly hour, travel across town and stand around for hours handing cups to thousands of sweat covered smelly runners! Thank you, Terima Kasih, Nandri, Xie Xie! You guys rock!

Then at 6KM, we ran on a nice flat and fast route, on the Seremban-Port Dickson highway. My original plan was to take a laid back approach to this race and run just for fun. Sometimes, race day is a funny thing. Most runners aren’t competing for first place. They are competing against themselves, either for a better personal time or simply to finish. Life is similar, while it may look like a race against others, the only real competition is yourself!

The route had something for everyone with some crowd lined closed roads, an idyllic rural village section through Port Dicksn. Seriously! Just do it! Ditch the elastic, hair bands, pretty clips and let your hair wild as you run ATM Half Marathon.

After the 9KM, the route brought us to a path just along the seaside, it was a beautiful sight, however we were faced with a slight congestion. Thankfully, the narrow path involved a short stretch. Some runners took the opportunity to stopped for a selfie along this path which featured the sea. It was a nice day, ocean breeze with melodic sound of waves, and yes it brought great feelings from the body to the soul. Then, we reached the 10KM-where all the 21KM runners had to cross the starting line to get to the 2nd loop. While I crossed the 10KM marker, runners for the 10KM category were in positions and were all in their corals on stand by to be flagged off.

Ohhh don’t forget to unplug your headphone and listen to the waves crashing, the birds chirping and the people/villagers playing. How refreshing to run with true awareness of your surroundings. Allowing my body fall into the rhythm of the natural soundtrack.

Then suddenly I heard, happy feet, happy singing, happy chanting sounds….The 10KM runners, along with the army, soldiers and trainees were running in groups..Oh what a marvellous sight! They were tough, they were singing, they were motivating one another. Then my thoughts diverted to Leftenan Adnan.Hmmmmmm…..He was a teacher but he chose to join the army and fight and defend our country Malaysia. He left his home, his parents, wife and kids to sacrifice, to fight, to defend our country- our beloved nation- Malaysia! He was strong and brave and faught until the end as the saying goes ‘ Biar putih tulang, jangan putih hati’. A sense of pride crept inside of me to be able to run side by side with the army, soldiers and trainees. I felt proud and honored to be part of ATM Half Marathon, to be running in honor of  ‘Angkatan Tentera Malaysia.’ 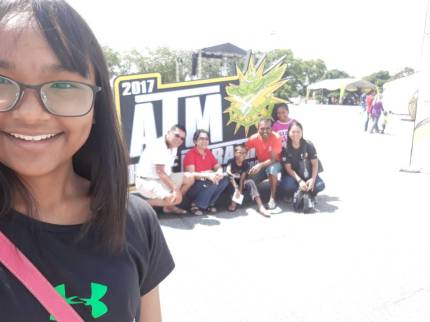 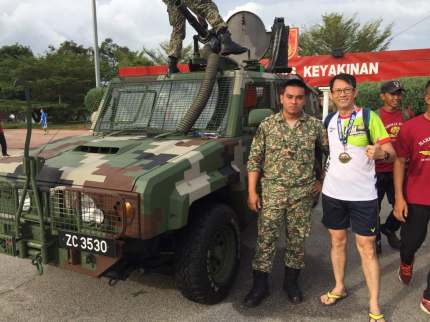 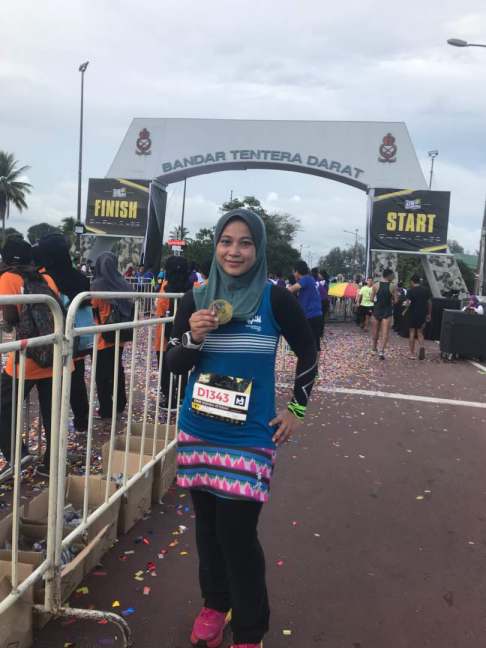 A few minutes later, they were out of sight. I was ‘only the lonely’. Then I cruised along the flat ground, keeping my breathing in check and noting who was around me. I didn’t want to run alone and there were a few times I surged ahead simply to stay with a pack of runners.

Then, I reached the main road-the round- about for the second time. Traffic control was tremendously execellent! Arrows and signages let us know we were always on the right track and marshals guided runners in the right direction while directing traffic and a few key intersections.

By the way, I have to say pacers are incredible! I am still feeling good…like surprisingly good. The route was still wet and foggy. It’s still cool, already feel drenched in sweat, but I’m immersed in the atmosphere and just generally happy. Around the 17KM there was a hydration station, volunteers handing them out for the runners to grab…I grabbed one cup of water and one cup of 100Plus, somehow that taste helped me get through..There were times throughout the race when I wanted to cry just because I was so happy! I’m not saying that the whole 21KM was such a breeze that I was on cloud 9 the whole time. What I am saying is that there I was- doing it-really doing it! Running 21KM- A Half Marathon.

My goal was to just finish the race. I was able to keep running, only stopping at aid stations/water breaks. I need to give a shout out and thank the stranger in the army uniform. He doesn’t know he did anything but I was trying my damnest to keep up with him. And I did, for a long time. So, Mr Soldier, thank you keeping me going, for motivating me and helping me not to stop or quit. Even though you have no clue and will probably never see this, you helped me immensely.

After the hydration station, I tried to remind myself I only had 4KM left to do. I do 5KM everyday, no sweat…that didn’t really work. I was already super tired and my feet hurt. But I still kept at it. At about the 18KM, I gave in and walked some more. I walked about 1KM. Maybe a bit more…I wanted to able to run to the finish so I was trying to preserve some energy. And then I saw it, in the distance….the end. It look SO.FAR.AWAY. I can do this…I turned my head to the right, and there I saw my hubby, standing next to my bro-Bufford and his wife Mary (who ran the 10KM race), cheering me on.

JUST GO…FINISH….and finish, I did..I threw my hands up in the air, like I just don’t care, as I crossed the finish…I got my awesome medal and my finisher Tee-Shirt and my legs felt like dead. But I just ran a half marathon…For someone who running does not come easy for, I was (am) unbelievably proud of myself.

After race ended, parts of my body I didn’t know I had started hurting. I felt like I got body slammed by the Hulk and then hit by a truck a.k.a Optimus Prime. When I got home, I showered, drove the kids to Sunday School, had lunch with mum, dad, hubby and kids and napped like my life depended on it. I walked like a penguin for a few days after the race.

I can’t wait to do it again. My favourite part of the race- EVERYTHING!  Overall, the hype, the people, the Army-soldiers-trainees, the crowds and the emotions…”Remember when you thought you couldn’t do this?” I do……..But I just did it and now I feel unstoppable. It was truly a once in a lifetime destination race and eventhough I wasn’t able to “RACE” it, just running it was such a gift!