I woke up early on Saturday, 31 March 2018 feeling refreshed from a good night’s sleep, the 10km Shamrock Run was the first event to start and we needed to be there at the start line by 7.20am.There was plenty of parking located at the UM, Stadium Arena.

There was great vibes in the air, with lots of excited, runners and walkers ready to discover where the Shamrock Run 2018, new venue and new route would take us.

The race was slightly delayed due to the rain. However, there were 1,500 eager and excited runners waited patiently for the flag off. We had a fun-filled warm up Zumba session (I always looked forward and love this part of the event) then the countdown shortly began after the Irish National Anthem and the ‘Negaraku’ was sung, over 1,500 sweaty bodies began pushing and shoving against each other, creeping into the 4th Annual Shamrock Run Malaysia 2018. My hubby, bounced and stretched, running in place, acting like one of those rodeo bulls trapped in the chutes just before the gates are opened…..LOL (Training for the SCKL 2018, can make a runner do crazy-impossible-hilarious things) 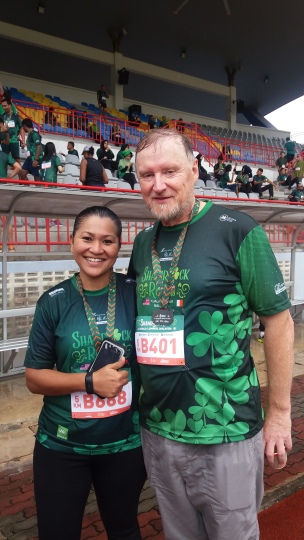 It took only the first kilometer before people started spreading out. That’s when I noticed I didn’t get my update from Endomondo through my mobile. I didn’t press the button! OK, frustration sets in. Yes, I could have stopped and taken my phone out of my arm strap and fiddled with it and got it started ahhhhhh but then it hit me, this is a fun run  and I was suppose to enjoy and have a good time)

I successfully rounded the 2 km without having to put this plan into effect. I was still hanging tough, and I wasn’t the last person in the race…..I knew this because people were still streaming around me from all sides.

The routes were remarkable! From flat road running to stairway to hell…LOL…It was really a cool sight to watched parents and kids running together, babies being pushed in their strollers by their running mummies, runners dressed up looking like green mermaids, macho men running in green sarongs, some were in their green Malay Baju Melayu. Then it started to drizzle, however those old endorphins had kicked in and I was feeling on top of the world. My confidence and ‘runner’s high’ rose exponentially. I wasn’t doing so bad. Fewer runners were passing me, of course, that wasn’t really surprising. We were bound to run out of people sooner or later. 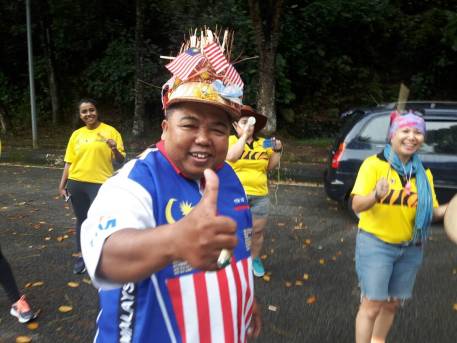 Nevertheless, a group of supporters/cheerleaders along the route made my journey awesome! Thank you “Famemas” running group! Your voices, your cheers brought joy and encouragement to all runners.

Then at the 4 km( I think- Bukit Chinta) I turned a corner and saw the hill looming ahead, taunting me with its knowledge that I could not conquer it. I considered falling to my knees and crawling up, but the race photographer stood at the top, taking pictures of each runner crested the peak. I wondered if someone would ‘tagged’ the photograph of me having a heart attack at the top of that blasted hill (LOL)

Then I heard, ‘sprint on it! Just a few more meters! Sprint on it! You can do it! Cheers and shouts along the sidelines in my direction. Sprint on it?? Were they trying to kill me?? I wasn’t sure at that point I could crawl in. Blinking the sweat and rain drops from my eyes, somehow I sprinted to the finish line, I smiled for the camera, got my medal, my snacks and goodies. It was a really nice feeling, having the opportunity to start and finish in the stadium. It gives me a great sense of pride and honor to be part of Shamrock Run.

I have nothing but amazing things to say about this race. The course was fun and excellent, the support from friends and spectators were awesome and the staff and volunteers were beyond amazing.

The only thing I wish that could be improved is the signage/distance markers.(Maybe due to the heavy downpour, signages were not visible) 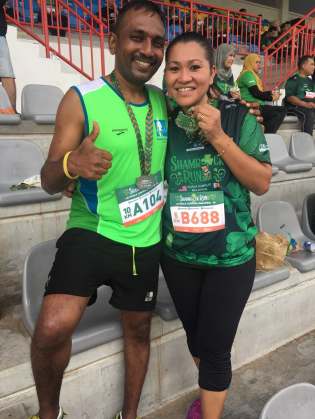 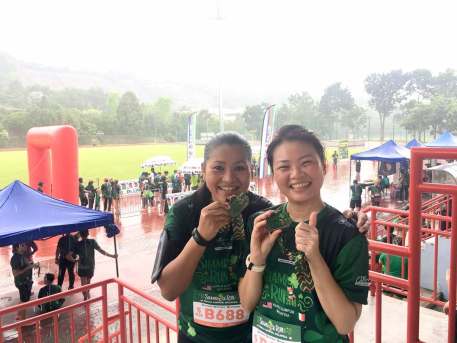 But really, what an epic experience, I will absolutely be back to run the Shamrock Run!