I wish I could race every weekend. Seriously! There is something about waking up extra early on a Sunday to meet up with some awesome people and then spend a period of time torturing yourself and feeling like you are going to die just to cross a finish line..Runners have a distorted idea of the word “fun”.

Well, what a weekend this has been. I always believed that not all runs or events are meant to be raced. While you select a few that you want to race, others are meant purely for the enjoyment factor.

On Sunday, we woke up early at 4.30am, pinned on our bibs, laced up and made our way to D’ Pulze Mall for the Shamrock Run 2017. We reached at 6.45am, parked our car CDB Perdana 1 (with security and guarded), just a 3 minute walking distance from the event venue and happily headed off with hubby and my three children.

What a beautiful morning, it was…we could hear the birds chirping and the darkness soon gave way to light as the sun’s first rays crept in. We met up with Josephine and her hubby Daryl, my cousins. This was our first run together and we were so excited and thrilled! However, there was a slight delay in the flagged off. The event began with the singing of the Irish National Anthem and followed by the Malaysian Anthem- “Negaraku”. Then, the Celebrity Fitness took over the stage and had a warm up zumba session which made the event fun and awesome! The costumes-while we dressed to race, many of the runners were dressed in green. ( Elves, Green Lantern, Hulk..) Oh my!

At 7.30am, the 10 km was flagged of and then followed by the 5 km at 7.35am. There were about 1000 runners participated in Shamrock Run 2017. There was a good amount of people of all ages- I love seeing families running together! What a great and awesome atmosphere! Some wore matching costumes, some were being carried by mom or dad, others with strollers and everyone looked like they were having an amazing time.

As I kept going ahead, I caught sight of the killer hill at 3 km. A sea of green (the colour of the event’s t shirt presented to every runner) had cascaded the slope. And of course both my children, Amisha and Avinash got so carried away that they totally forgot about “having fun deal”. Both of them ran a sub 30 minute and really pushed it at the end sprinting to the finish line with their daddy. So extremely proud of them. Anjali and I arrived ten minutes later, followed by my cousin Josephine and her hubby, Daryl.

At the finishing line, we were each given our finisher medals. There were lots of food trucks, free drinks, ice cream and many many more freebies and goodies. My family and I took lots of photographs and really had an awesome time together! A moment I will always cherish and treasure forever….The family that runs together- Sticks together..LOL! 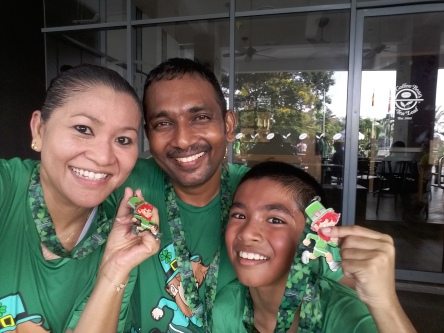 Overall, Shamrock Run was well organised-eventhough there were lacked of Marshalls and police traffic however, the route had less traffic, so it was safe to run. Water stations were well manned and plenty and medal distribution was efficient.

But then, unforeseen things and circumstances happens much like life, there’s always something that you cannot plan for or expect. When we got to our car, we discovered the car window was broken and our car was broken into, we lost cash and other stuff. There were 5 other cars that shared the same fate as us. But, everything happens for a reason. How you deal with that, can help you succeed in the future and assist you overcome new challenges and lessons to be learnt!

When something bad happens, you have three choices!

You can either let it define you! Let it destroy you or you can let it strengthen you!

One thought on “A bitter sweet Shamrock Run 2017 – Race Review”